Who mourns for Pluto?

In a week in which councils of men and mice sat to discuss such issues as peacekeeping forces in Lebanon and the future of multi-culturalism in the UK, it was the meeting of the IAU in Prague that has perhaps caused the most consternation. The outcome of the meeting will have more lasting repurcussions (especially for school text book authors) than any event since the birth of Elvis.

PLUTO IS NO MORE!!!
Posted by Nige at 8/24/2006 03:20:00 pm No comments:
Email ThisBlogThis!Share to TwitterShare to FacebookShare to Pinterest

Classic Star Trek take on those god-awful inspirational posters you see in offices these days.

Visit the link above to see the entire catalogue. Some of the best examples are below :-) 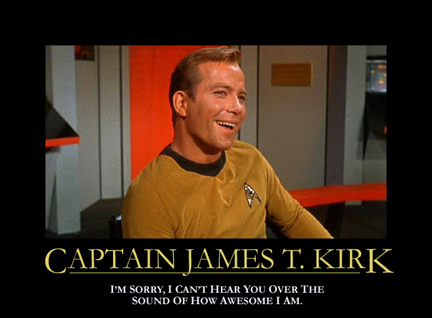 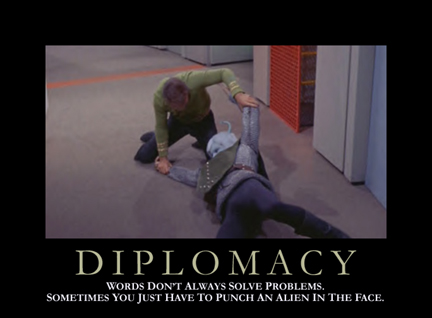 Posted by Nige at 8/15/2006 02:06:00 pm No comments:
Email ThisBlogThis!Share to TwitterShare to FacebookShare to Pinterest

Israel vs Hezbollah: A prelude to an attack on Iran??

Interesting article claiming that the US government was aware of Israeli plans to bombard Lebanon long before the capture of two Israeli soldiers, which sparked the current conflict.

The story has been broken by the veteran journalist Seymour Hersh, reknowned for exposing the Abu Ghraib abuse scandal as well as the My Lai massacre during the Vietnam war.

It is claimed that an assault on Hezbollah was a pretext to a US pre-emptive strike on Iranian nuclear facilities. Such an attack would surely have brought retribution to the United States closest ally in the region, Israel. Thus by pounding Hezbollah Israel was ensuring that at least one of it's enemies was in no fit state to cause it too much trouble. This now seems unlikely given that Hezbollah has proven that, despite 4 weeks of sustained bombing, they are still capable of launching over 200 rockets a day into Israel.
Posted by Nige at 8/14/2006 08:17:00 am No comments:
Email ThisBlogThis!Share to TwitterShare to FacebookShare to Pinterest

The trailer to Miami Vice was sharp, intense and very stylish. It reminded me of the original show only with a more modern setting. Sadly the movie itself only manages to be stylish. So stylish in fact, that it is completely lacking in credibility and plot.

It's a really sad fall for Michael Mann, the director who gave us such classics as Last of the Mohicans, Heat and The Insider. It isn't that Miami Vice is badly shot, produced or scripted. The problem lies in that we've been down this very same road before with undercover cop movies.

The opening 15 minutes are decent. No opening credits, no long-winded setup of the characters. We see Crockett (Colin Farrell) and Tubbs (Jamie Foxx) thrust straight into the seedy underworld of the Miami club scene. They clearly have a well-established team, so no need for any long and boring introductions.

Then it all goes, well, boring. Sent undercover to work for a top drug and gun baron, Crockett and Tubbs spend the next 90 minutes reaming off stylish, but pointless, dialogue and acting out numerous plot cliches. From early on it's clear that Tubbs' wife/girlfriend is going to be captured by the bad guys and held hostage. It's also obvious that Crockett is going to fall in love with the big bosses woman and thus risk getting 'in too deep'. There is nothing, absolutely nothing, new here. Undercover cops, get in too deep but bring down the bad guys just in time to save the day. And when they aren't in too deep, they are driving a combination of fast cars, fast boats and fast planes... or having fast meaningless sex.

Add to this the betrayal by the nasty right hand man of the drug baron and I've pretty much told you the entire story in 2 paragraphs. It took Michael Mann over 2 frigging hours.

The only saving grace, is the final gun-fight. Shot in wartime documentary style, it is very gritty and reminiscent of some of the best action moments from Heat. However, after 2 hours of watching snails crawl up walls it wouldn't have taken much to make me feel entertained, so it's possible that the gun-fight isn't that great either ;-)

In summary, Miami Vice is a truly woeful movie. The acting is fine without ever being amazing and the direction is ok, but it almost feels like Mann knows his story truly blows and so he tries to cover it up with beautiful locations, fast cars, lots of sex and some stylish music. That might wash with some teenagers, but not with me. The only thing that saves this movie from being the worst I've seen all year, is the final gun-fight and the fact that I've already awarded that title to the even more dreadful Slither!
Posted by Nige at 8/09/2006 02:02:00 pm No comments:
Email ThisBlogThis!Share to TwitterShare to FacebookShare to Pinterest

One of those silly little things doing the rounds.

***Your Daddy Is Patrick Stewart***

What You Call Him: Pops

Why You Love Him: He takes you to Disneyland

Woohoo... my daddy is Patrick Stewart!
Posted by Nige at 8/08/2006 09:13:00 pm No comments:
Email ThisBlogThis!Share to TwitterShare to FacebookShare to Pinterest

I've always been a little nostalgic towards Superman. I loved the Christopher Reeve franchise, or at least the first two films (after that it went a little off the rails!). A new Superman movie has been touted for years. Nic Cage was strongly linked with the main role, but thankfully pulled out. And don't get me started on the Tom Cruise rumours from the mid 90's (the guy is at least a foot too short!!). Meanwhile, directors have come and gone, as have scripts.

That the vision of a new movie has finally been realised, is due in no small part to the resurgence of comic book adaptations and the success of the Superman prequel series Smallville. Once Bryan Singer (the director behind X-Men and therefore the man responsible for the superhero come-back in movie form) was attached to the film it became clear that this time it was for real. Add to this a stunningly haunting teaser trailer and I have to admit that my expectations of this film began to rise.

So to the movie, the critical success/failure of any Superman movie was always going to be judged on how well the relatively unknown Brandon Routh did in convincing us that a guy with glasses was worlds apart from the guy in the cape. In this aim, the movie is fantastic. While I wouldn't normally entertain the notion of an actor mimicking his predecessors performance, it seems to work brilliantly here. Routh captures Christopher Reeves style perfectly. If I have one niggle, it's that we don't see enough of Clark Kent and his relationship with Perry and Jimmy (something that was always amusing in the earlier films).

As with Bryan Singers X-Men, this movie almost feels like a setup for future movies. I loved the X-men franchise, but the first film did feel like there was too much emphasis on setting up the scene and introducing the characters. The same can be said for Superman Returns.

For chronological sake this movie is considered to follow-on from the events of Superman II (thankfully it would appear that Superman III & the woeful IV are considered to have been wiped from existence). We find that Superman has been missing for 5 years. He left without warning, leaving the World wondering why. Other than that the classic characters are all present and correct, Jimmy still eats and sleeps with his camera, Perry White is still looking for all the scoops and Lois is still the top reporter, only with a couple of big differences, she has finally landed the Pulitzer Prize for a piece on why the World doesn't need Superman, oh and she has a kid and a bloke in the shape of Perrys son (James Marsden).

Naturally, it isn't long before we see Superman return, and in spectacular fashion. It is probably the best set piece in the entire film which culminates in one of the grandest entrances ever for a superhero. Well I suppose we would expect nothing less.

Unfortunately, this is where things start to go wrong. The main threat in the movie is again posed by Lex Luther. His plan, which involves throwing a crystal in some water and thus killing billions of people is preposterous. Lex Luther is a fantastic villain, but this version is somewhat lacking. Don't get me wrong, Spacey does a superb job and is suitably nasty, but he lacks the sheer genius and cunning previous incarnations of his character thrived on. If I was to compare Hackmans Luther with Spaceys Luther there is no contest. Gene Hackman captured the characters twisted sense of genius brilliantly. This latest version is just twisted. This is a real shame because it feels like an opportunity has been wasted, especially when you consider Kevin Spaceys undoubted talent.

As I mentioned earlier, the movie feels like a setup for things to come, and this is clearly illustrated with the introduction of Lois Lanes child and her current love interest. A lot of time is expended on what is essentially a simpler take on the traditional Superman love triangle. In the previous movies this involved Superman, Lois and Supermans other woman... namely the rest of the human race. I don't particularly mind the decision to introduce Richard White as Lois' love interest, in fact his character is easily the best after Superman/Kent, mainly because the other co-stars have very little to do while Lois and Lex fail to really inspire anything other than disappointment. However, the story is not really concluded, more left for future expansion, which could prove interesting.

Which brings me nicely onto the point that really grates with me. Kate Bosworths Lois Lane is dreadful. If you ignore the fact that she's far too young it's impossible to ignore the blatant change of the character from hard-hitting do anything it takes reporter to complete damsel in distress. No actress captured the style of Lois Lane quite like Margot Kidder. Sure she had to be rescued a fair amount, but as a person she was equal to Superman. She was a classic example of a woman trying to prove herself in a mans world, a fact that resulted in her going further than a man would ever go to get results. Kidder was not a stunning screen goddess, she was a character actress who brought a very un-hollywood character to life. Sadly, this new Lois Lane is really just a pretty reporter who occasionally takes a few risks, but ultimately is not in the same league as the Margot Kidder version. If you wanted to compare characters, compare this Lois Lane with Mary Jane Watson from Spiderman. They are pretty much the same character, purely there for the superhero to brood over and rescue as many times as possible.

So there we go. At times poignant (particularly when looking at Brandon Routh who is hauntingly similar to the late Christopher Reeve), at times brilliant, but too often dragged down by a lame plot and weak co-stars. Nonetheless this is a very fun Superman film. It lacks the comedy of the earlier films a fact made clear by the lack of screen-time given to Perry, Clark, Lois and Jimmy. Action-wise, there is little to top it this year. I definitely preferred it to Pirates of the Caribbean, although I'd say they were probably very similar in style. Both had superb performances from the leads, a lack of involvement from the other characters and silly, contrived plots. But hey... that's what summer blockbusters are supposed to be about ;-)
Posted by Nige at 8/01/2006 02:18:00 pm No comments:
Email ThisBlogThis!Share to TwitterShare to FacebookShare to Pinterest
Newer Posts Older Posts Home
Subscribe to: Posts (Atom)