I don't know what it is that makes being a football fan in England a trying time. For some reason English teams are incapable of winning competitions without putting their fans through every emotion. But then, if they didn't, victory wouldn't taste quite so sweet!

Liverpool, rich in history but without any significant success in over a decade, returned to the top of World football on Wednesday night with a performance that belied the 100-1 odds placed on them in December. Both Liverpool and AC Milan played a part in the most astonishing final in footballing history.

Trailing 3-0 at half-time to one of the most experienced Italian teams ever assembled, bookies started offering odds of up to 350-1 on Liverpool fighting back to win. Italian teams NEVER surrender such leads. No team ever comes back from 3-0 down in crunch games. 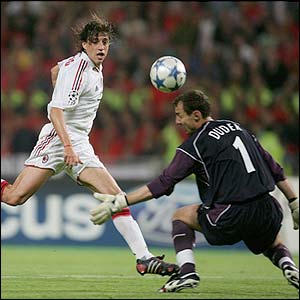 As the second half kicked off my only thoughts were that we didn't get humiliated. What followed though was more akin to something out of a Rocky script. First Gerrard fired in a header from range. His response was to run to the fans and urge them to get behind the team. Then Hamman set up Vladimir Smicer. So often a pariah, he hammered the ball into the bottom corner of Didas goal.

AC Milan had collapsed. Every pass, every 50/50 ball, every move went Liverpools way. On 60 minutes Gerrard latched onto a pass that split the AC defense. Bundled to the ground, Gerrard won Liverpool a penalty. Alonso, seeing his effort saved, pounced on the rebound and hammered it into the net. 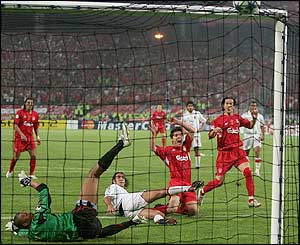 Nobody could believe what was happening. It had taken only 6 minutes for Liverpool to humble a team that in the first half had taught them a footballing lesson. A team that had won this trophy only 2 years previous.

The match moved into extra-time with AC Milan laying seige to the Liverpool goal. Minutes from the final whistle, Jerzy Dudek, pulled off two stunning point blank saves. That Dudek, a player whos inconsistency has cost Liverpool many matches this season, should be the hero seemed pre-ordained, and as the game entered penalties he etched his name into footballing legend. He turned back the clock to 1984 and mimmicked that other great Liverpool eccentric Bruce Grobbelaer. Dancing and clowning around on the goal-line, Dudek succeeded in putting off the AC Milan spot-kickers. One miss and 2 saves later, Liverpool were champions. 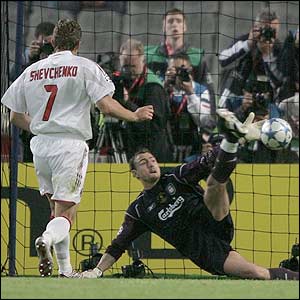 It's two days ago now, and it still hasn't sunk in. I realise that people who don't understand what it is to support something like a football team can never understand, much as I cannot understand peoples faith in their religions. However, this event is the most amazing thing I have ever witnessed. That I was helped through the trauma of penalties by several Man Utd fans, further illustrates that every once in a while football can bring people together. 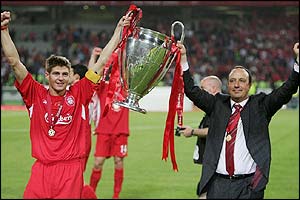 "How can I think of leaving Liverpool after a night like this?" - Steven Gerrard, plays his part in 'Liverpool: The Hollywood Story'.

When I look back at Wednesday night I honestly can't believe it happened. If it had been written by a Hollywood scriptwriter, it would have been laughed out of the studio. This was Rocky 1-5 and The Great Escape rolled into one. The sequel though, is already being penned as Liverpool fight to be given the chance to defend their title next year. Their poor league performance has meant that, regardless of playing a part in what was arguably the greatest sporting comeback in history, they do not merit a place in next years competition.

"Should Uefa prevent Liverpool from defending it next season, it would be a denial of everything that is great and important about football. All of which we witnessed last night." - Independent
Posted by Nige at 5/27/2005 07:09:00 am
Email ThisBlogThis!Share to TwitterShare to FacebookShare to Pinterest

Well done. From a Man U fan, that's high praise ;)