tr.v. fragged, frag ging, frags
To wound or kill (a fellow soldier) by throwing a grenade or similar explosive at the victim: "He got fragged. Blown away" (Bobbie Ann Mason).

And there I was thinking 'fragged' was a term coined for FPS games! The term was popularised during Vietnam, when discipline lagged and a few officers got grenades in their bunkers or caught "friendly fire" during a skirmish.

After watching episode 3 of this new season of Galactica I got into a conversation with some friends about just what this show is. Sure it is science-fiction; as my mate Mike pointed out, it retains many sci-fi elements, particularly with regards to the Cylons. But, perhaps more than anything Galactica is a political, wartime drama set against a sci-fi backdrop. It does not offer the optimistic visions of Star Trek or Stargate; nor the happy endings to every situation.

DS9 was very much the bastard child of Trek; hated by many of the star trek execs for messing with the optimistic vision. It was a brave change of direction for a franchise already showing signs of extreme tiredness. Ron Moore was one of a number of talented writers and producers who fought to give DS9 the edge that made it easily the most compelling trek story to date. Galactica is perhaps an example of Ron Moore let off the leash. With his associate David Eick, and writers D Weddle & B Thompson (both DS9 old-timers), we have a show that has broken the traditional bonds of sci-fi, much like Trek did decades ago and Bablyon 5 did in the 1990s.

Galactica is about normal people dealing with impossible situations. All are flawed, and none of them will deal with their flaws within the 45 minutes of an ep (a la Trek). It has been only 2-3 months since the children of humanity came home to destroy their creators. The people are in a mess. None of them have been trained to deal with this kind of situation, and in 'Fragged' things finally come to a head. 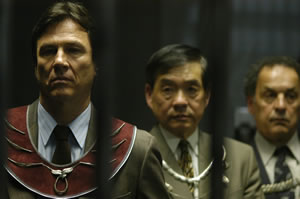 First to Galactica. Having finally driven the Cylons off the ship Tigh is forced to face the consequences of both his and Adamas actions in removing President Roslin from power. The Quorum of Twelve (the newly elected government of the fleet) want answers and Tigh is not about to be bullied.

The episode is a testament to the adage 'better the devil you know'. In Adama, the fleet had an old warhorse as military leader. He was dangerous and would not be undermined, but he respected the need for the people to have a government, even in their current dire circumstances. With Tigh now in command, things could not be worse. He is a military lifer, who has had little time for politics. He is weak, prone to flying off the handle and likes drinking on duty far too much. He wants to calm the situation, as Adama would, but does not have the strength of character to pull it off. As such, when things get too much for him, his decisions can be catastrophic. 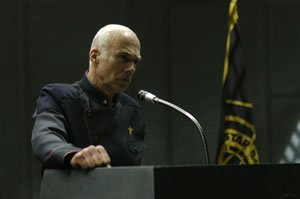 The interplay between Tigh and the government is superb. His attempt to portray Roslin as a lunatic backfires because of his refusal to even talk with her. Now the government not only see her as their leader, but as their spiritual martyr, destined to lead them to safety. Some may find the way in which the Colonial religion has begun to take hold of so many people a little annoying, but personally I find it all the more realistic. After such a tragedy it is only natural that many people will turn to their religion to help them through; even more so when their leaders preach it so readily.

For Tigh though, the entire episode is an affront to his authority. He wants to be Adama, but cannot, and his petty actions at the end of the episode will have far-reaching consequences.

Meanwhile, things also come to a head on Kobol. Crashdown is a prime example of great characterisation. For a whole season he did his job in tough conditions; you never suspected he could ever struggle purely because he hadn't been thrust into a situation he couldn't handle. Now trapped on Kobol, he is out of his depth. As commanding officer, his decisions have indirectly cost at least one life and now he wants the remaining 5 of them to launch an attack against a Cylon anti-aircraft battery. Baltars visions tell of one person betraying the others; Tyrol is a loyal soldier but knows that the plan is flawed. Something has gotta give, and it finally does.

The consequences of the Kobol mission will, I imagine, be everlasting. In Galactica, there is no reset button at the end of each ep.

In summary this is the best episode of the season so far. The interplay between Number Six and Baltar, so often the low point of season 1, has been vastly improved; and all they had to do was remove the OTT sexual references! The discussion about what defines humanity is interesting as is the mystery surrounding the Cylons clear hatred for Kobol. The performances, meanwhile, are stunning. Tigh, Crashdown, Tyrol, Baltar and Roslin all steal some dramatic scenes. Oh Ron Moore, why can't you come back to Star Trek and make it better?!