Serenity, no spoilers I promise

What a night! Joss Whedon and UIP could not have wished for much more. Tickets for Whedons debut film had sold out within 60 minutes of going on sale and on turning up at the CineWorld multiplex the atmosphere was buzzing. Outside, a crowd had been swelling around the red carpet for hours, while inside some hardcore film buffs started queuing fully 4 hours before the scheduled start time.

Once comfortably seated in the packed Screen 7, there were jokes about how the people at the Edinburgh Film Festival had 'discovered' this young writer/director and that while we probably hadn't heard of him, he was a real up and coming talent. On that note Joss Whedon and cast wandered on stage to the first of many standing ovations. Cue more jokes from Joss Whedon about not wanting the film to stand on its own merits, until finally, it was time for the lights to go down.

The first 20 minutes of Serenity move along at a startling pace and it really attacks the senses in a audacious display of effects, action and wise cracks. Yet these opening minutes maintain far more coherence than you may imagine given that the viewer is forced to take in a lot of information in such a short space of time.

If I had one fear prior to seeing Serenity, it was that Firefly would not travel well from the small screen. For the film to be a considerable success it needs to reach an audience beyond the fans of the original show. This simple fact was always going to fuel a need for the movie to explain much of the back-story, potentially leaving the fans upset at having to sit through explanations of things they have already seen. However, Whedon is a master at creative storytelling. Throughout the film he works to immerse the viewer in his vision of the future. There is plenty of new plot points to keep the fans happy, while the backstory is woven into the dialogue in a way that avoids patronising the die hards. Obviously, being a fan this is easy for me to say, but I feel confident that someone who has never seen the show will be able to follow Whedons story without confusion.

For those familiar with Whedons previous work, you will already have witnessed the mans ability at mixing genres. Episodes of Buffy would often merge teen drama, horror and black comedy; all set against a fantasy background. The characters had depth, perhaps more than in any other science fiction or fantasy show. With Serenity, Whedon diverges from the traditional mould of Hollywood sci-fi, to bring us a film that will make you laugh, cry and jump out of your seat. It is as much a psychological thriller as it is a sci-fi; as much an black comedy as it is a thriller. Weave into this complex story, characters with real life and you have a winner.

As with his previous shows, Whedon delivers characters that rarely fit a hollywood type. It would be unfair to call Mal Reynolds the flawed hero of Serenity, because his character is so much more than this. As in the series, there are times when you think to yourself, 'Mal, you are an absolute bastard!'; yet you still love him because he represents reality. His flaws will not be 'fixed' in the course of an episode or a movie, he will live with them and those around him will have to tolerate them. The same can be said of all the characters, and because of this you care about them.

So how does Serenity hold up against other sci-fi, action or fantasy offerings? Well the last few year has offered much but delivered little in my opinion. For me War of the Worlds, Fantastic Four, Star Wars and the many others follow the age-old Hollywood formula. They do this because the studios know what makes money; a lot of people (myself included, from time to time) like movies where they can put their minds on hold and just enjoy a basic plot with some fun action. And this is perhaps the mountain that Serenity must climb. There is no putting your brain on hold with Serenity.

Without a doubt, this is one of the best sci-fi films I've seen in years. It wipes the floor with Star Treks formulaic storytelling and makes the awful Star Wars dialogue and wooden acting look even more laughable. The action, meanwhile, is as good as any superhero movie. However, the question remains as to whether it can break into the mainstream. It couldn't have been put any better, when it was mentioned that the Edinburgh Film Festivals mission is to showcase brave and different movies. And Serenity is very brave. The characters are unconventional and the differences between good and evil more clouded. If the masses in the USA can give this one a chance, then Serenity could well be the surprise package of the year.

In summary, Whedon takes science fiction into a deep new realm of realistic characters who, when they aren't pulling heists, are spouting witty dialogue. Dark and brooding in some places, wrapped up with sexual tension in others, Whedon even finds time to reference Buffy and take the piss out of the formulaic plot devices used in other sci-fi films. The performances (particularly of Fillion, Baldwin and Ejiofor) are fantastic. Perhaps the only downside for me was that some characters had only limited screen time. You will struggle to see a better film come out of Hollywood this year. 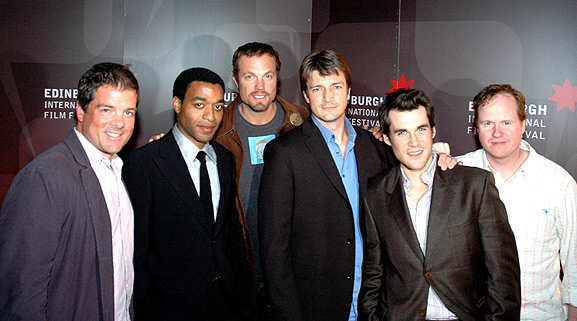 Following the film, there was an excellent Q&A session with the cast and crew. Joss Whedon escaped doing the 'dance of joy' due to his recent knee surgery, but passed the honour onto Nathan Fillion, who did superbly. There is some footage from the premiere now online. The first four links are footage from the red carpet, while the last two are links to footage from the spoiler-laden Q&A session. The quality isn't great, so if I find any better footage I'll be sure to post it. Thanks to scifiheaven.net.

I refered to this on my blog Nige, & all my friends are calling for you to be nerfed!

Great post, Nige. You really summed up what makes Firefly so enjoyable - the characters - and it's great to hear that is sounds like the movie captures this again.