Every once in a while a movie comes along that has avoided the media hype machine and thus is a bit of a mystery when you finally go to see it. While I'd seen the trailer to Children of Men, which was half depressing dystopia and half happy 'ray of hope' style mercy mission, I still didn't really know what to expect.

Set in 2027, the World order has collapsed due to women becoming infertile some 20 years before. Only Britain retains some semblence of order, through its totalitarian governments use of brute force to keep the population in check. Foreigners are scum and to harbour one is illegal. Immigrants fleeing persecution abroad are thrown into disease infested refugee camps. 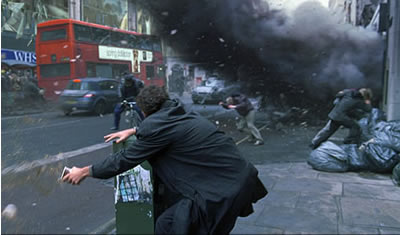 Kidnapped by a terrorist group called The Fishes, Theo (Clive Owen) finds himself face to face with his ex-wife Julian (Julianne Moore). The Fishes demand equal rights for foreigners and have hidden a young pregnant girl, Kee (Claire-Hope Ashitey); the first known pregnancy in nearly 20 years. What follows is a gripping and poignant drama as Theo struggles to get Kee out of Britain to 'The Human Project', a safe haven in the Azores.

The film is shot in various styles, but what really stands out is the raw intensity during many of the scenes. From the panic-driven set-piece involving a car being chased down by terrorists, to the sheer brutality of the final chapter in the refugee camp of Bexton Hill, this is a masterpiece. Indeed the final chapter seems designed to be a not too subtle pointer to the current situation in certain war-torn lands in the Middle East. 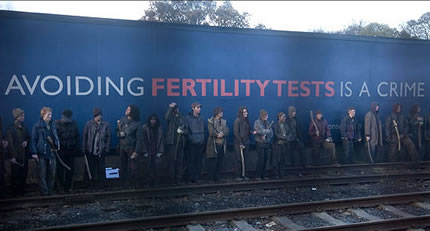 With some superb co-starring performances from Michael Caine and Chiwetel Ejiofor (of Serenity fame), this is a movie that never fails to disappoint. It is crammed full of research and it is clear that the makers have gone to incredible trouble to make every set authentic. In a scene were the set is walled with windows covered in old newspapers, everyone tells a different story of this fall of humanity, even including the sports pages (look for 'FA Cup Cancelled' as a headline!). The refugee camp is a massive complex of burnt out buildings reminiscent of the ones we have seen so many times in Lebanon, Palestine, Somalia et al.

Touching yet brutal, funny yet depressing, Children of Men is a must-see movie. Easily one of the best of 2006.
Posted by Nige at 10/11/2006 12:47:00 pm
Email ThisBlogThis!Share to TwitterShare to FacebookShare to Pinterest