Is it a remake? Is it a re-imagining? Is it a totally separate movie in it's own right? I'm still not entirely sure.

4 years after the stunning Hong Kong flick Infernal Affairs breathed cool back into cop movies, Martin Scorcese's US version has arrived. And I'm left in a quandary over how to review it.

It's impossible to take a serious look at The Departed without comparing it to Infernal Affairs. The scripts are very similar; many of the key plot points are the same; most of the characters follow the same path. And after seeing both I can honestly say that Infernal Affairs is by far the better movie.

Compare The Departed with other Scorcese movies, like Taxi Driver or Goodfellas and it more than holds it's own. Despite it's origins being in the Far East I still left the cinema feeling that I'd seen a tense, dark and gritty commentary on Irish-Americana. When viewed in this way, The Departed shares little in common with Infernal Affairs. This new movie has as much to do with the ethnically driven tribal warfare going on in South Boston than it does about tracking down moles in the police and mafia. Indeed, the director spends considerable time looking at the backgrounds of not only the two moles but also the gangland boss Frank Costello (Jack Nicholson).

I was equally worried about seeing two of Hollywoods pretty boys (Matt Damon and Leonardo DiCaprio) playing the two moles. However, I again couldn't fault either of them. While Damon didn't exactly set the world on fire, his performance took a different slant to that of Andy Laus character in Infernal Affairs. Colin Sullivan (Damon) is much more of a weasel than Lau. It's less subtle, but it fits with the style of the film. 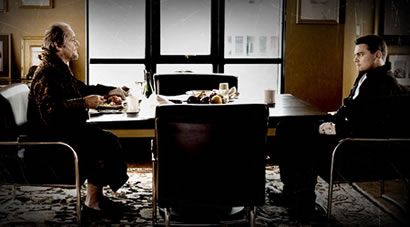 DiCaprio, meanwhile, proves that he seems to have put the spoilt kid from the days of Titanic and The Beach behind him. Like Robert De Niro before him DiCaprio has become a mainstay of Scorcese's films. While clearly outshone in Gangs of New York by Daniel Day Lewis, his performance in The Aviator was a tour de force. Now in The Departed, he puts in another strong performance as the violent, tortured soul, used by the Police, to bring down Costello.

Mark Wahlberg and Alec Baldwin both deserve mention; playing new characters not seen in Infernal. Martin Sheen, meanwhile, puts in a subtle, but poignant performance as Costigans (DiCaprio) Captain, and main contact in the police.

Now onto the bad. The Departed suffers from that classic Hollywood need to notch up the love interest factor. While in Infernal Affairs Tony Leung is forced into seeing a psychologist, only a platonic relationship (with hints of more) develops. In The Departed, Costigan is forced to see Madolyn (Vera Farmiga), a cop psychologist who is also girlfriend to Sullivan. A needless love triangle ensues which adds nothing to the movie and for me lessened the impact of the main story. 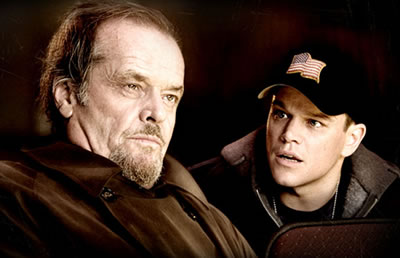 Similarly, while I enjoyed the character of Dignam (Wahlberg), his addition seems only to serve the directors desire to change the ending. Oh yes, Scorcese changed the ending. You can see it coming, but even when it does it feels tacked on and rushed. I can see why Scorcese made this decision, it fits with the style of the film. But I'm still not sure whether I like it.

So in summary, I'd definitely recommend seeing it. It's dark, violent and harsh. If you compare it to Infernal Affairs (and you will!), you may be disappointed, particularly with some of the changes. However, if you can view this film as a different beast, one that highlights the ethnic divisions and violence throughout South Boston you may find yourself saying it's his best work since Goodfellas.

"The call that a paradox" - Frank Costello (Jack Nicholson)
Posted by Nige at 10/09/2006 09:30:00 am
Email ThisBlogThis!Share to TwitterShare to FacebookShare to Pinterest