How long have I waited? It seems like an age. Yet in truth the first season of Battlestar Galactica finished only 6 months ago. Now, Ron Moore and David Eicks terrifying vision of apocalypse has returned to my plasma screen and all is good.

Well, it's good for me, but not so good for the Colonial Fleet. In fact it's very baaaaaad for the handful of human survivors. Season 1 left us with an almighty cliff-hanger and for those hoping for a nice and quick Star Trek resolution, you'll be disappointed. Season 1 only covered about 60 days and this new season looks set to follow that similar pattern, meaning that wounds that are fresh at the end of one ep, may take a good long while to heal. 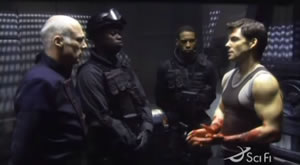 In 'Scattered' all eyes are on Colonel Tigh, who has taken command of the fleet while Adama is incapacitated. He is given little time to settle in before a Cylon base star attacks. In the confusion of the escape jump Galactica becomes separated from the fleet without a clue how to locate them. Meanwhile the President remains locked in the brig with only Apollo for company. On Kobol the battered and bruised survivors of the Raptor crash struggle under the command of the ranking officer, Crashdown; Baltar is little help either, due to him now spending most of his time in a delusional state. Back on Caprica, the bloodied Starbuck now has to deal with a slightly love-sick Helo and Sharon the Cylon. 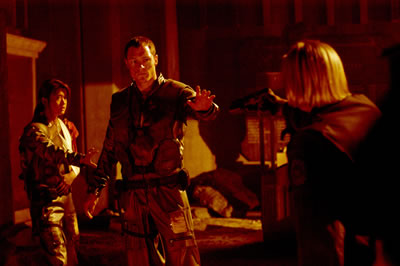 So all in all, the Human race is pretty screwed.

Yet again, Moore and Eick have given us an episode that offers little comfort. The victories are minor, but are made to feel huge because they are the only thing giving people hope. The truth is that the by the end of the first episode they are no better off than at the start. But sometimes, just keeping the status quo against overwhelming odds feels like a victory.

There are some good flashback moments which give us a brief insight into the mind of Colonely Tigh. He's a man at odds with himself; a man that very probably shouldn't be serving in the Fleet. Now he's in command, and that is potentially a very scary prospect.

What can I say, I love this show. It is dark, gripping and (for a Sci-Fi) very realistic. Not one of the people could be considered model citizens and that shows. Again, the performances are superb with the Tigh, Boomer, Crashdown and Tyrol standing out in particular. BSG is back, my summer is saved!