Following directly on from the events of Scattered, the crew of Galactica have little chance for a breather. The joy at having relocated the fleet is short-lived as a Cylon virus completely knocks out the ships power. With Cylons having infiltrated the Starboard hanger bay, the episode becomes a race against time to stop the Cylons getting to vital systems and turning the Battlestars powerful weapons on the fleet. 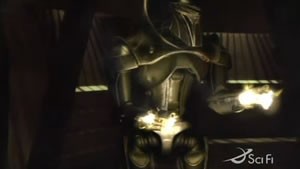 The a-story, while exciting, is certainly not what draws the attention this week. The events on Caprica and, in particular, Kobol continue to intrigue. Having come under fire from an unknown force (presumably Cylons, but maybe not!), Tyrol and Cally make it back to the others with another med-kit. The events on Kobol are becoming more frantic every episode, and I think it's only a matter of time before Tyrol comes to blows with his inexperienced superior officer; Crashdown. Tyrol seems to be very much in the mold of Deep Space Nines Chief Engineer O'Brien; a man who has seen the horrors of war but is inevitably never the commanding officer.

Early on there is a truly shocking moment as Baltar, who's delusions are becoming more frequent, sees a vision of Adama taking his baby away. It is a superb bit of self-referentialism to a scene in the pilot and is so twisted that it further adds to the strength of this show both as a sci-fi and a psychological drama. 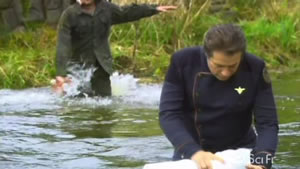 The only calm moments are to be found, of all places, on Caprica. Helo and Starbuck are searching for a ride off their former home. Despite the dangers Starbuck insists on popping into her apartment for a break. It may seem crazy but it actually comes across as quite poignant and surreal, that in the midst of this tragedy these two people can sit and just relax.

Some may find the action on Galactica a little OTT and un-original. A lot of the common plot points are there. Apollo and his team are the only ones left standing in the way of the last Cylons - check; they are low on ammo - check; the only way out of the battle for President Roslin takes them right past the point where Apollo is to make a heroic final stand - check. However, it's still good fun and it's great to see the CGI cylon centurions finally spilling a fair amount of blood.

The final scenes offer some superb dialogue between Tigh and Apollo; both men who are, by their own admission, not fit to wear the uniform. 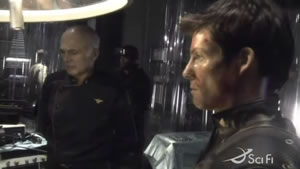 In summary, not as polished as 'Scattered' but full of action and intrigue. As much as I love the darkness and the trauma, I have to admit that there is a danger of 'war fatigue' setting in if the rag-tag fleet don't get a breather soon.