The final episode before the mid-season break sees homage being paid to the classic show, in a big way. 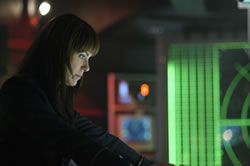 While initially jubilant at the thought of a fully manned, fully armed battlestar joining the fleet, things soon take a turn for the worst as Cain initiates sweeping changes; transferring key crew members to the Pegasus. Events are complicated yet further when an incident involving Helo and Tyrol leaves a Pegasus crew member dead.

After a short break from serious hostilities, the tension is definitely back. Having Cain as a woman (in the original show the character was played by the late Lloyd Bridges) is a masterstroke as it only heightens the tension between the old warhorse (Adama) and his superior.

Again, Ron Moore and David Eick push the boundaries of mainstream sci-fi by highlighting some harrowing events on board pegasus. The sight of a Cylon prisoner, battered and motionless, after suffering months of physical and emotional abuse, is quite shocking and gives Tricia Helfer (Number Six) and James Callis (Baltar) a chance to break from the mould we have seen them in over the previous 18 months. Although only short scenes, they include some of the best performances by both actors. 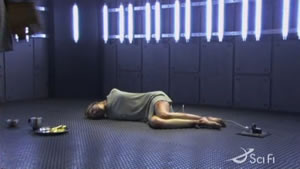 If I have a criticism, it is that the story feels rushed. While things are brought to a head by a serious turn of events, Adamas crucial choice at the end of the ep, does seem hasty. I've since discovered that the 45 minute ep was originally shot as a 90 minute TV-movie and as such, vast sections have been cut out. Rumours persist that the full-length ep may find its way onto the DVD release.

In summary, a classic cliffhanger that deals with some pretty heavy issues. Sometimes it really is hard to believe Ron Moore once worked on Star Trek.