It's hard to believe how far Peter Jackson has come. Only a few years ago he was a little known director of some classic cult movies. Now, he is one of the most successful directors of his generation and following Lord of the Rings it was only fitting that he be given the chance to remake the movie that first got him interested in the business.

For a remake Kong is VERY true to the original. In many ways the movie is an expansion on the classic story, delving deeper into some of the characters while exploring Skull Island far more than was ever possible in 1933.

For those not in the know Kong follows the adventure of film-maker Carl Denham (Black) as he recklessly sails into the unknown in search of a mysterious island on which to shoot his make or break movie. Joining Denham on the appropriately named tramp steamer, the Venture, are talented writer Jack Driscoll (Brody), B-movie film icon Bruce Baxter (Chandler) and unknown actress Ann Darrow (Watts).

In a very bold move, Jackson chooses to dispense with the action for the first hour, instead expanding on the growing relationship between Darrow and Driscoll. While in theory this is a good idea, in practice it does make the first hour seem laboured. However, we all know what is coming and when it does, oh boy! 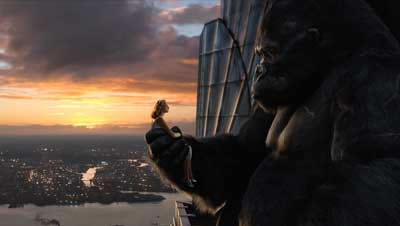 Despite being pounded by high sees and jagged rocks, Denham takes his filming party ashore, driven only by a desire for fame and fortune. Of course, he is in well over his head and even as his friends begin to lose theirs he remains on a determined course. I have to say that Jack Black is superb as Denham. He is the bad guy of movie, yet it's impossible to hate him. He's just an opportunist who does not see what Darrow sees.

Now entrenched on the island, we finally get our first glimpse of Kong. And he is beautiful. Having snatched Darrow, the adventure can really begin. The crew of the Venture join forces with the film crew to rescue the young actress, although it could be argued that Denham is still far more interested in shooting his picture than performing heroics. What follows is over an hour of tense jungle horror as the team are picked off one by one in increasingly gruesome fashion.

While dinosaurs and other monsters take care of the Venture crew, Ann Darrow begins to strike up a relationship with the big ape. This is where Kong is truly magnificent. Watching the growing bond between them only makes what is to come all the more heart-wrenching. Which of course is the idea! Like all good movie relationships the two also find time for a lovers tiff, before Kong proves his position as ultimate king of the jungle by kicking some serious T-Rex ass and rescuing Darrow from certain a certain munching. 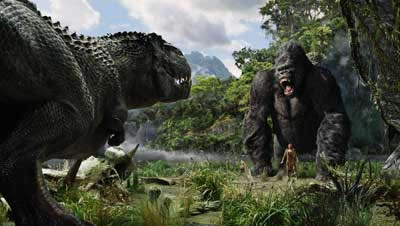 However, this ain't no happy love story and as such it couldn't be called King Kong without that ending. Jackson remodeled New York to look exactly how it would in 1933 and the attention to detail is stunning. Like the original, it is hard not to feel something for the poor doomed 'beast' as he scales the highest point in New York just to keep Darrow 'safe'. Ironically, I actually found his capture on the island more heart-wrenching than the finale, perhaps because it was the moment that the King truly died in my eyes.

All in all It is a fantastic film to watch and I would recommend it to just about anyone, although perhaps not little children.

On the downside though, the film is overly long. At over 3 hours it is billed as an epic but in truth it is relatively light on material. While Jackson had stated he wanted to give the characters more depth, he seems to ignore most of the human characters once they reach the island. The hard work spent building up the Darrow and Driscoll relationship just disappears during the 90 minutes on Skull Island.

Perhaps the most grating thing though, was the way Jackson builds up Jimmy the cabin boy (Bell) before casting him aside without a mention. Despite my usual hatred for plucky, youthful characters with a lot to learn, Jimmy is actually a superb addition to the story. Having been given an extraordinary amount of screen time, on par with that of Denham and Driscoll, his character is dropped the moment they've escaped the island. Of course, you could argue that as he's a member of the Venture crew there is no need for him to appear in the final acts. While that is certainly true of the other crew members (including Captain Englehorn), Jackson has invested considerable time in Jimmy and it seems wasteful that this buildup is predominately for nothing. It may not bother everyone, but for me (and Holly) it felt like a very sloppy piece of scriptwriting.

As I mentioned earlier, the film does feel too long and I think this is down to Jackson wanting to ensure he did so many classic scenes justice. Unfortunately, some of the scenes are just OTT. Don't get me wrong, the drama and suspense on the island are fantastic, but at times it felt like some of the more extravagant scenes were put in for the sake of showing how cool the guys at WETA are. A good example of this is the giant creepy crawly scene - resurrected from the original movie - that sees some of the remaining survivors being picked off by various giant leeches, spiders, and all manner of bugs. The funny thing is, that this is a superb set piece, but by now I had actually begun to get a little bored of watching the 'red shirts' die. They had already been trampled by a dino stampede, chased by Raptors and mashed by Kong himself. It just felt like overkill for me, despite being a loverly shot piece.

My final gripe is one I didn't expect. First let me say that the special effects of Kong himself are truly remarkable. Every scene with him in is gorgeous and the WETA peeps have done a stunning job. That aside, it surprised me that some of the none Kong CGI elements were quite poor in places. To be fair, some of the scenes are very complex and it may be a case of them being a bridge too far for current CGI techniques. The stampede is a good example of this which, while tremendously intense, just looked too clean and 'fake'. However, the biggest issues were, by todays high standards, relatively simple pieces of CGI. In particular, many of the scenes involving the CGI lifeboats were awful and reminded me of the poor fx in parts of Narnia.

To be honest I came out with the same feeling that I have had after seeing the recent Star Wars movies; that an over-reliance on green-screening is not always a good thing. Merging CGI with traditional techniques can produce far more fluid films, a la Jacksons previous epic Lord of the Rings.

Phew... okay, for those still with me, let me just apologise for perhaps focusing too much on the negative elements in the film. If I could re-iterate... IT IS A GREAT FILM. It's just not the best of the year.

King Kong: 8/10
In summary, a stunning, if flawed, fantasy epic that again illustrates that remakes can work. However for all it's flaws nothing can change the utter beauty of King Kong himself. Every scene he is in is superb, from the poignant to the tragic to the horrifically violent. Empire recently stated that if the Academy had any balls they'd give Serkis an Oscar for best actor. For once, I agree with them.